What is BCD and How is it Used in Automation?

The BCD system offers relative ease of conversion between machine-readable and human-readable numerals.
3

In this article, we will learn about BCD, Binary Coded Decimal, which offers relative ease of conversion between machine-readable and human-readable numerals.

As computers evolved from very early transistor-based models to the desktop personal computers using microchips, memory and instruction registers were 8-bits in length with computing, having to adapt to the standard decimal-based system.

Specific instructions used by programmers early on were designed with 8-bits in length to facilitate all of computing. These instructions have been maintained throughout the years of computer development, and will most likely continue to be used in the future.

Within computers, each of the 8-bits has only two values for representing either a logic 1 (or True) and a logic 0 (or False).

This is what is referred to as Boolean in computer science. Boolean logic and expressions make the system of using binary numbers perfect for use in digital or electronic circuits and systems. 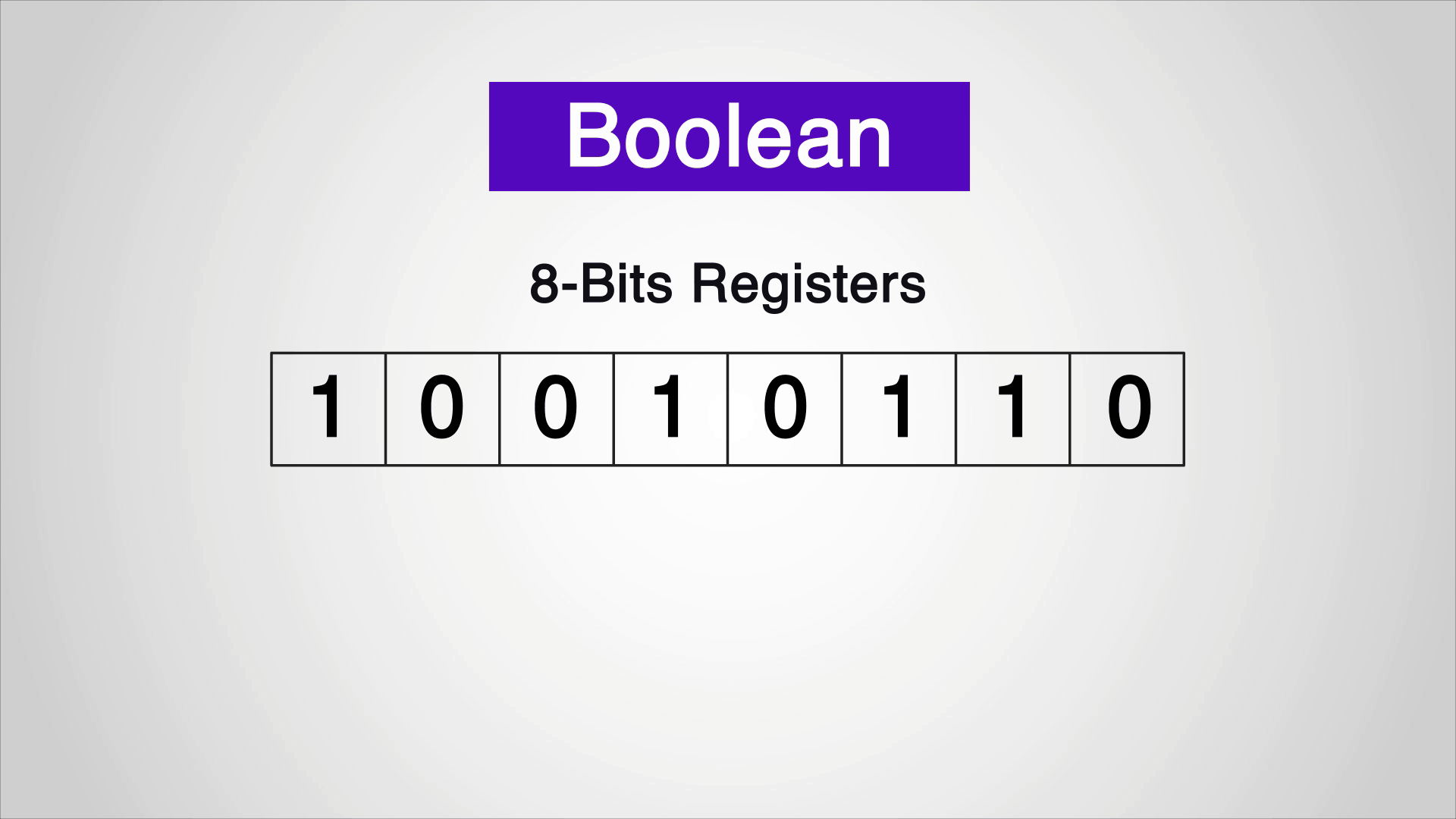 The BCD system offers relative ease of conversion between machine-readable and human-readable numerals.

Advantage of the BCD System

An advantage of the Binary Coded Decimal system is each decimal digit is denoted by a group of 4 binary digits and that it allows easy conversion between decimal a base-10 system and binary a base-2 system. 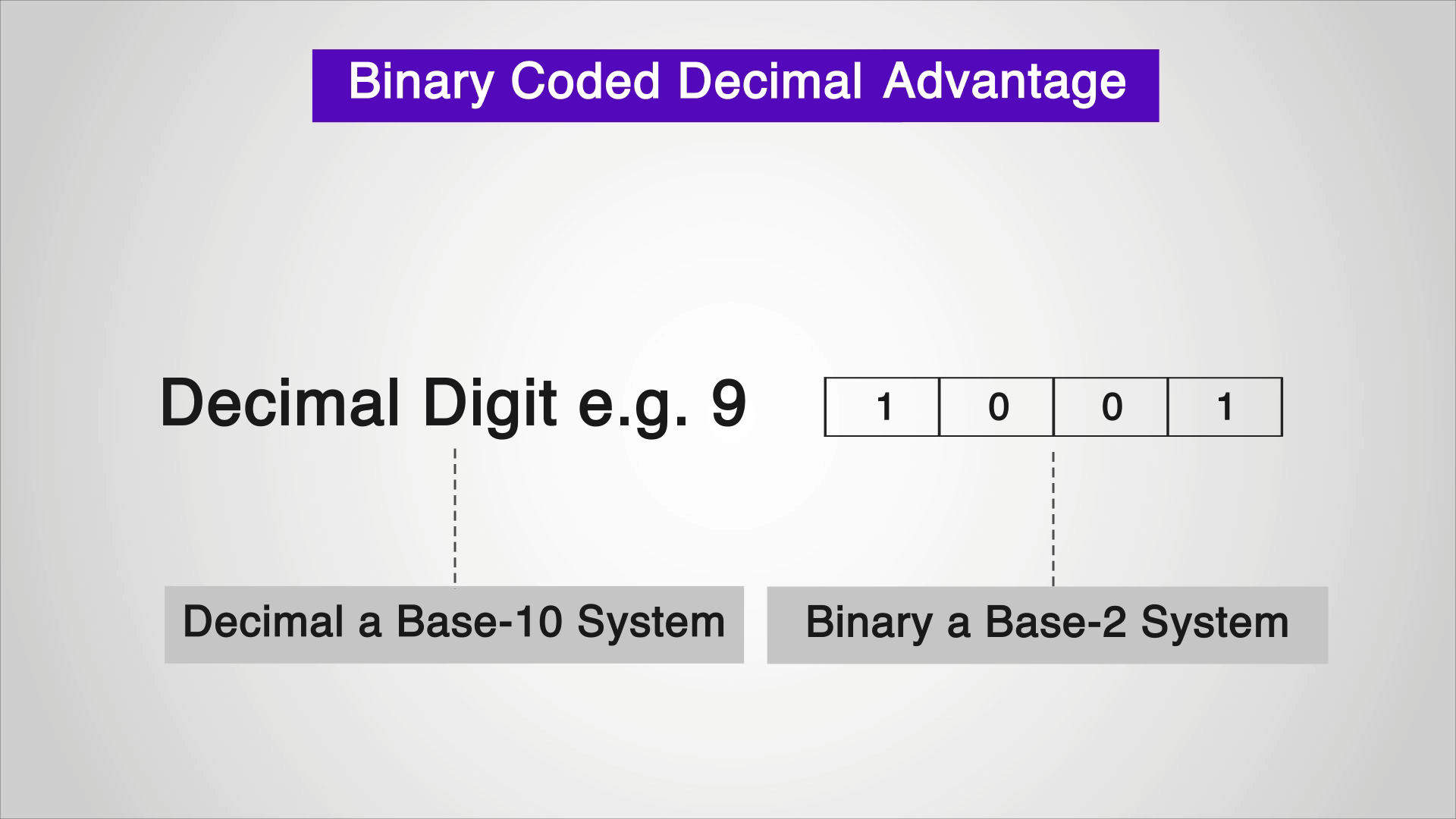 Disadvantage of the BCD System 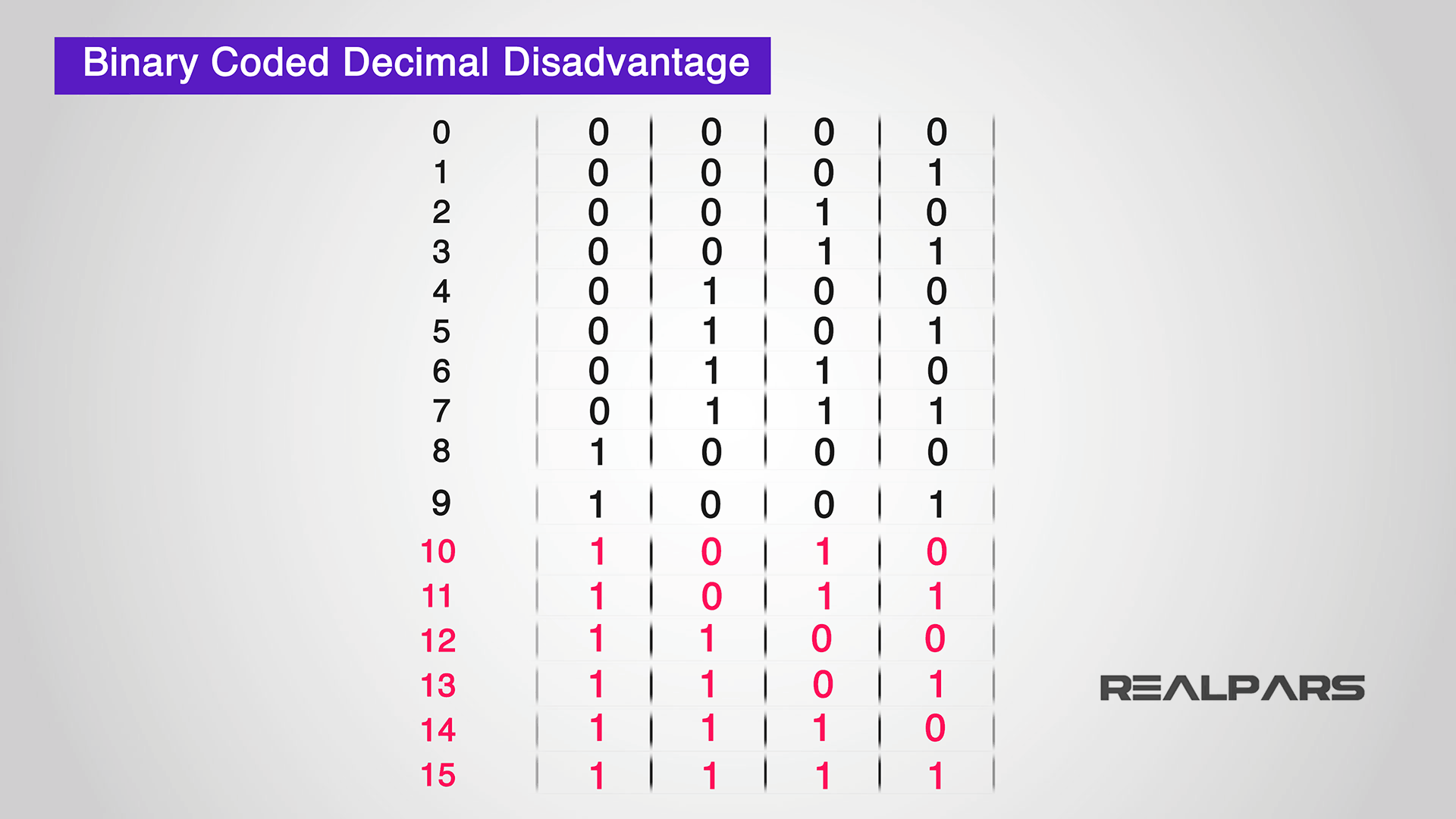 This system is a Base-2 numbering system which follows the same set of rules used with decimal or base-10 number system. 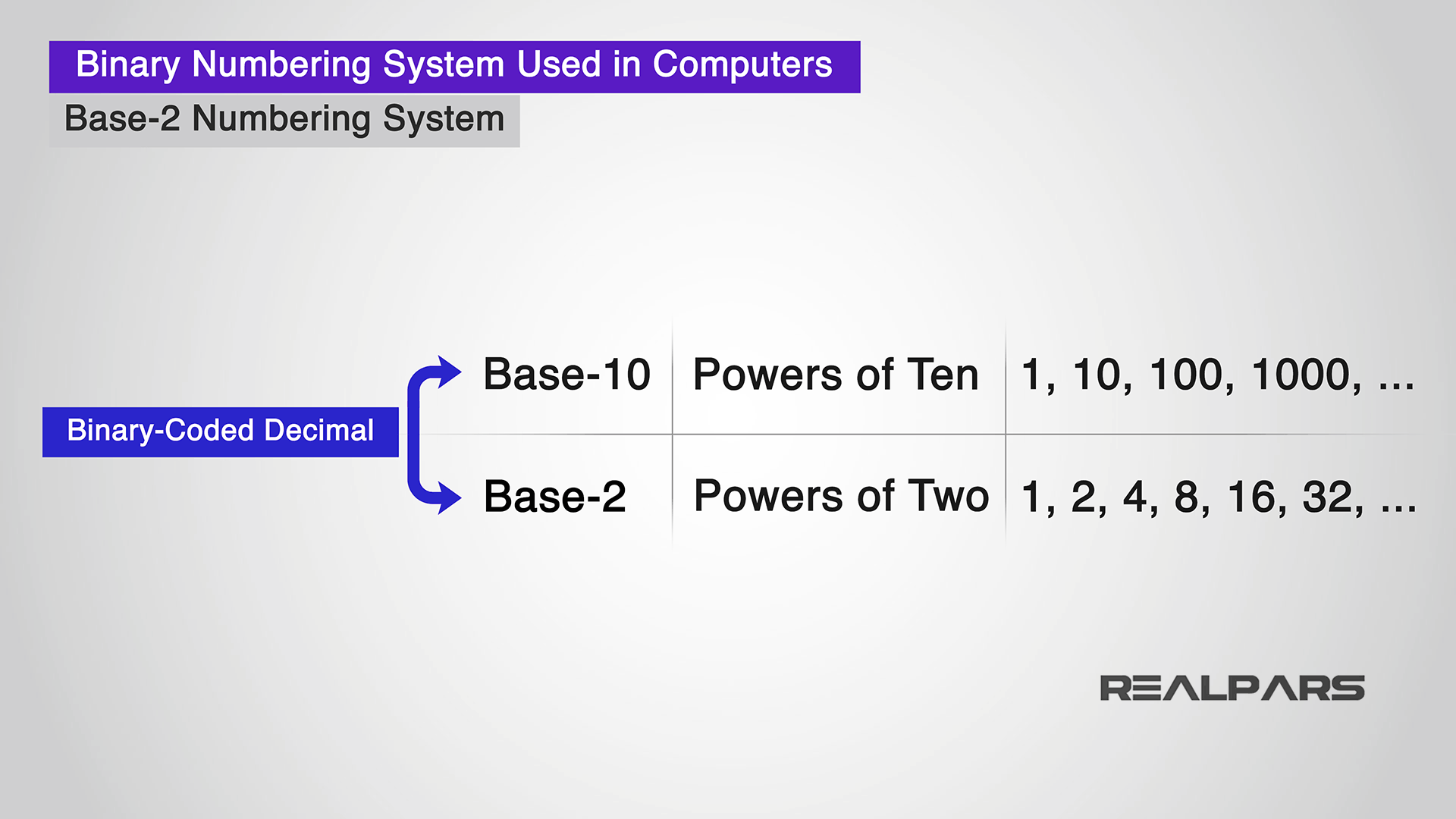 Binary-coded decimal or BCD is a code using a series of binary digits or bits that when decoded represents a decimal digit.

So, each decimal digit 0 through 9 is represented by a series of four binary bits where the numerical value when decoded is equivalent to a decimal digit. 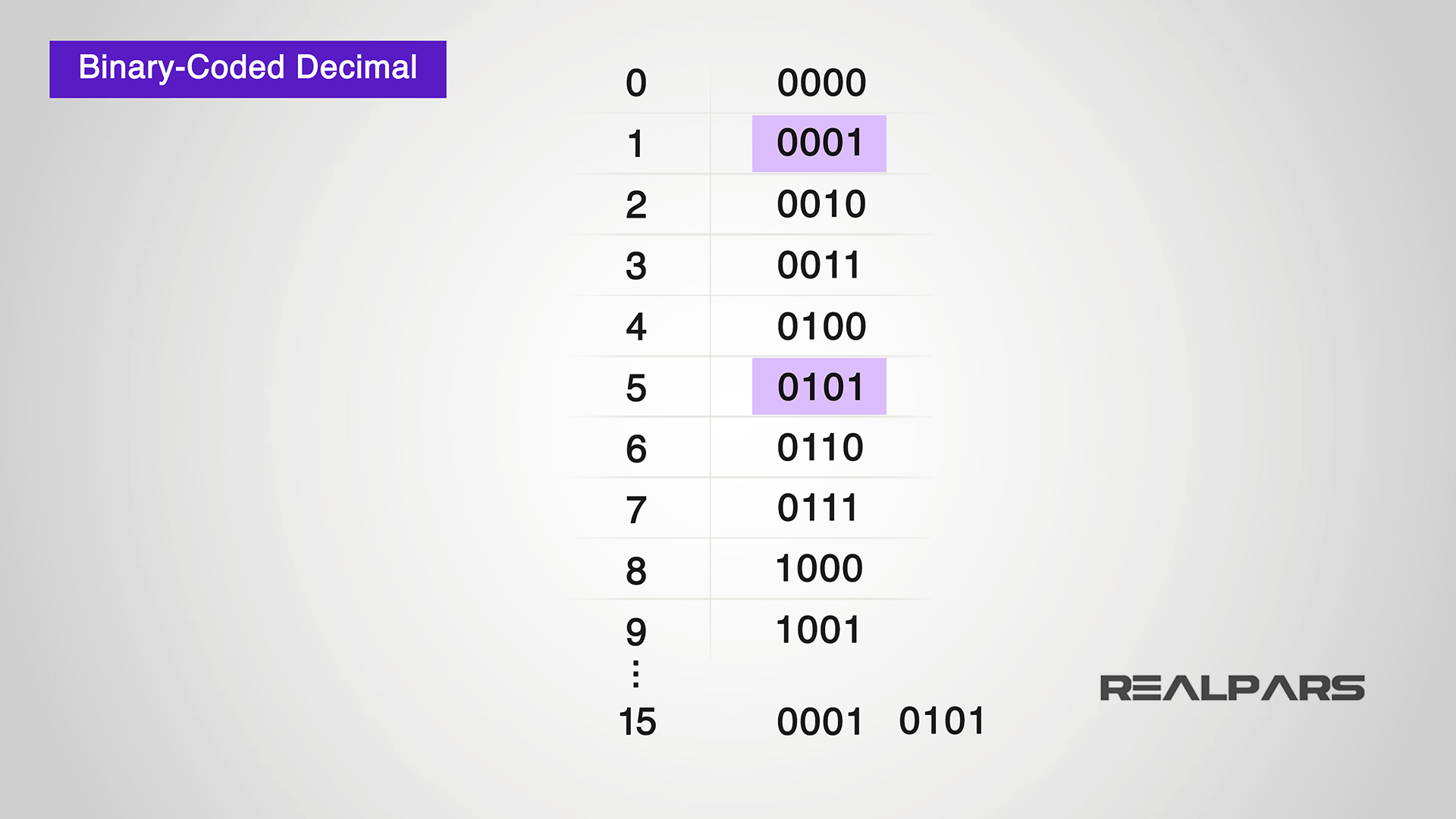 Let’s look a bit closer on how this conversion works.

As you can see in the illustration below, the decimal weight of each decimal digit to the left increases by a factor of 10.

With BCD number system, the binary weight of each digit increases by a factor of 2. 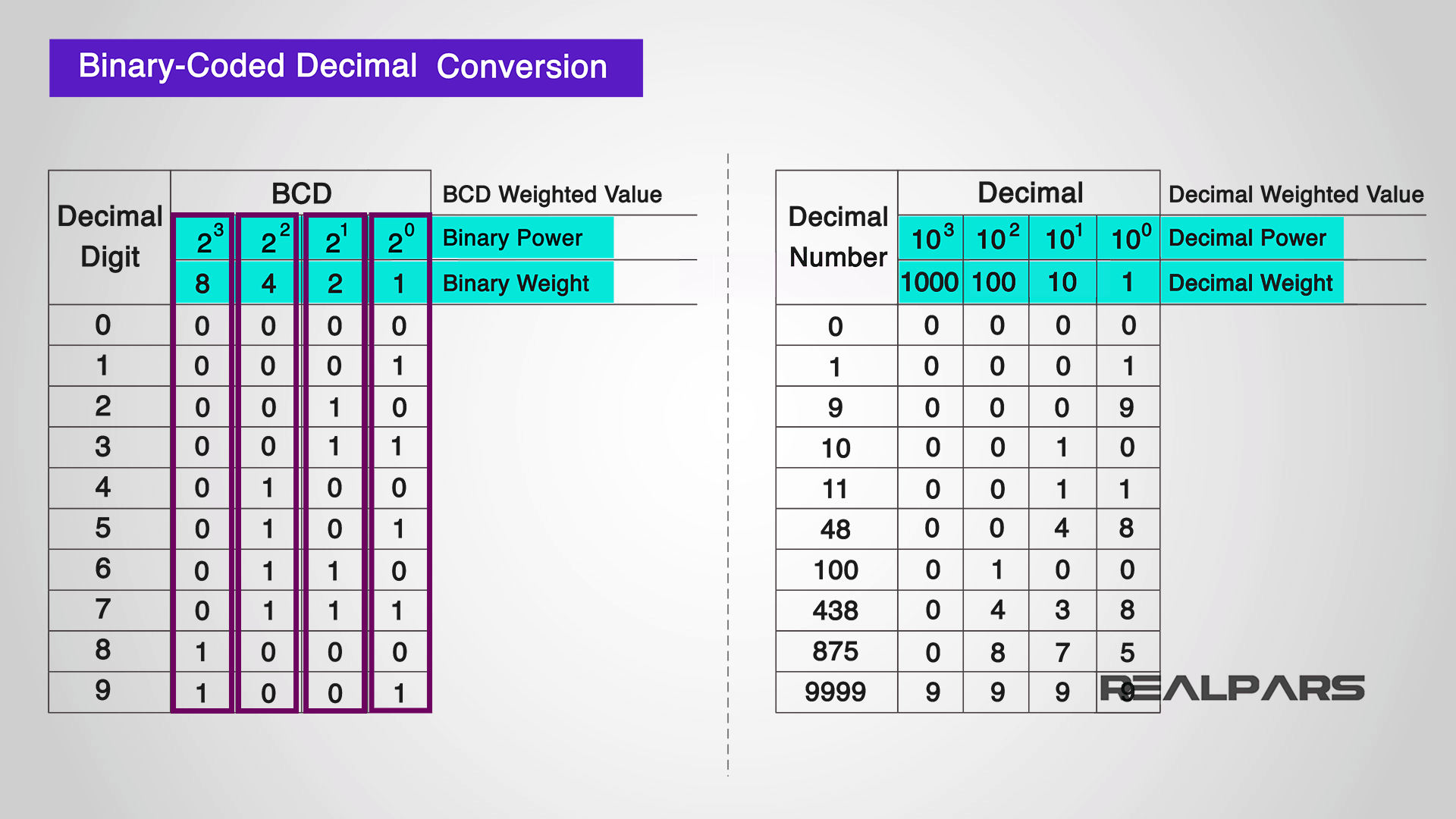 Now with the basic understanding of the binary-weighted system, the relationship between decimal numbers and weighted binary coded decimal digits for decimal values of 0 through 15 are provided as a truth table for BCD. 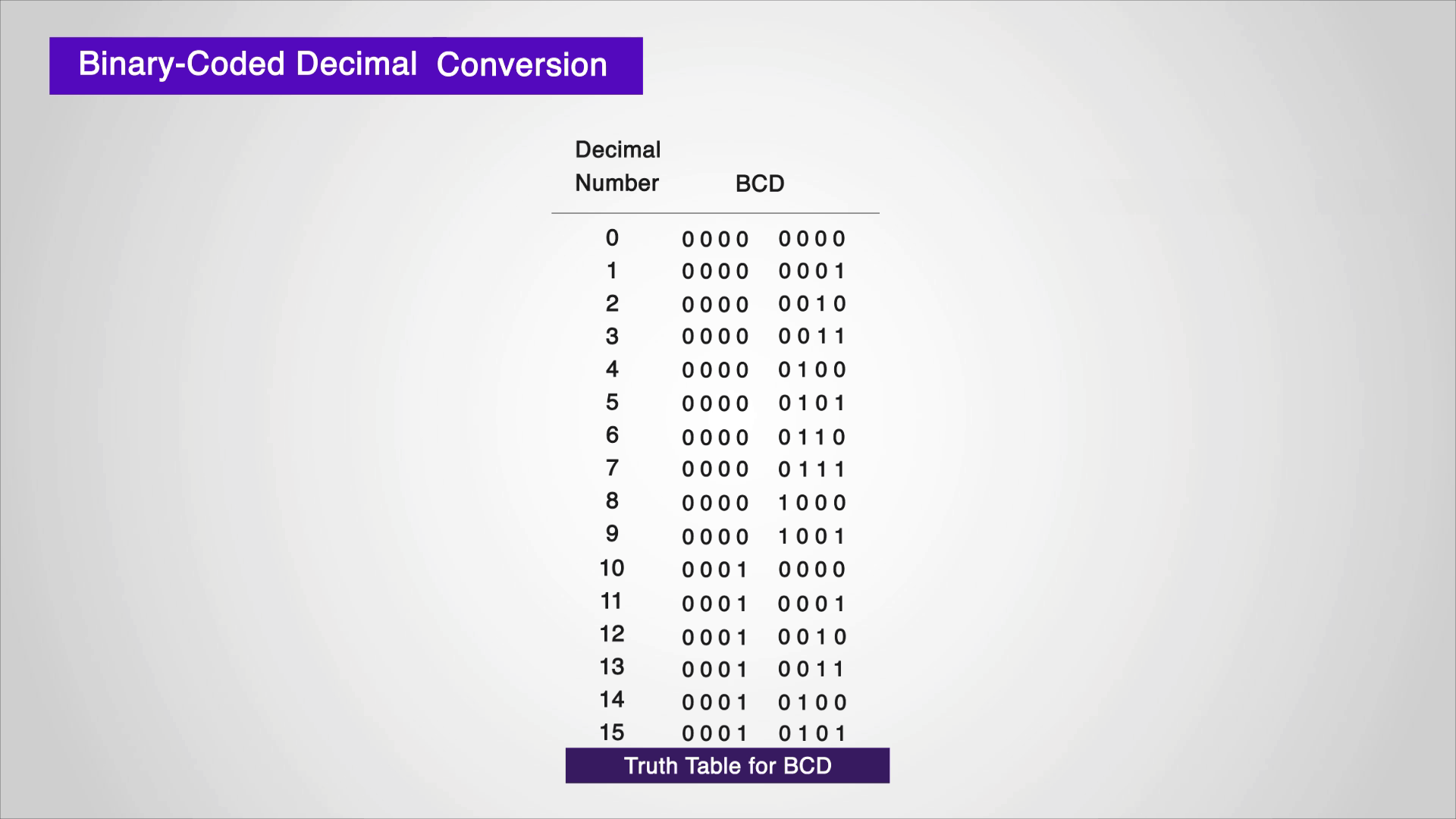 Keep in mind, Binary-coded decimal is not the same as binary to decimal conversion. For example, if I would represent the decimal number 72 in both forms, the bit formation would be like this: 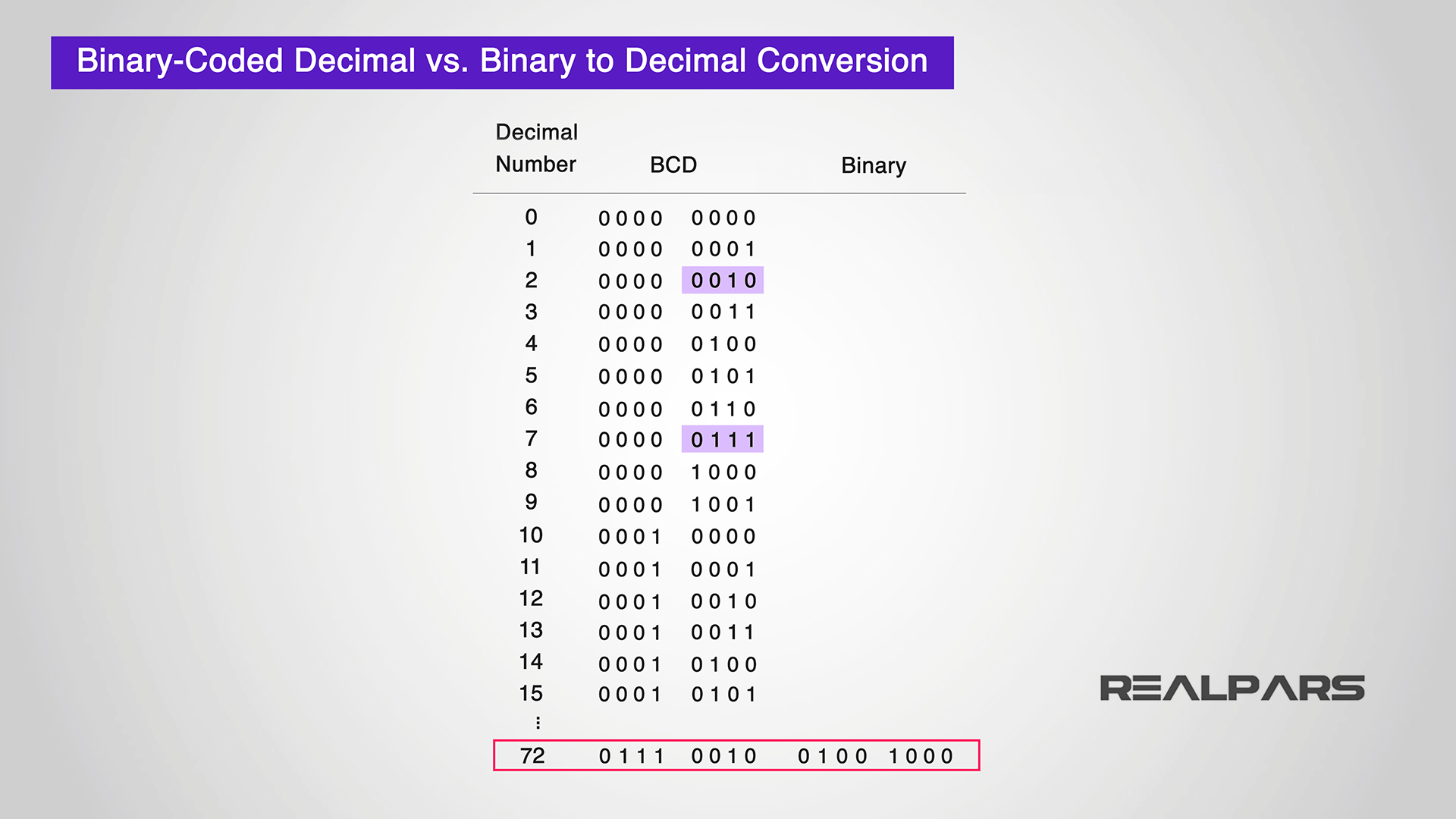 When we use a table to explain and expand out the weighted values, using 16 bits, we can convert the following decimal numbers: 9620, 120 and 4568 into their binary equivalents.

By adding together all the decimal number values from right to left from each of the bit positions that are represented by a 1 gives us the decimal equivalent. 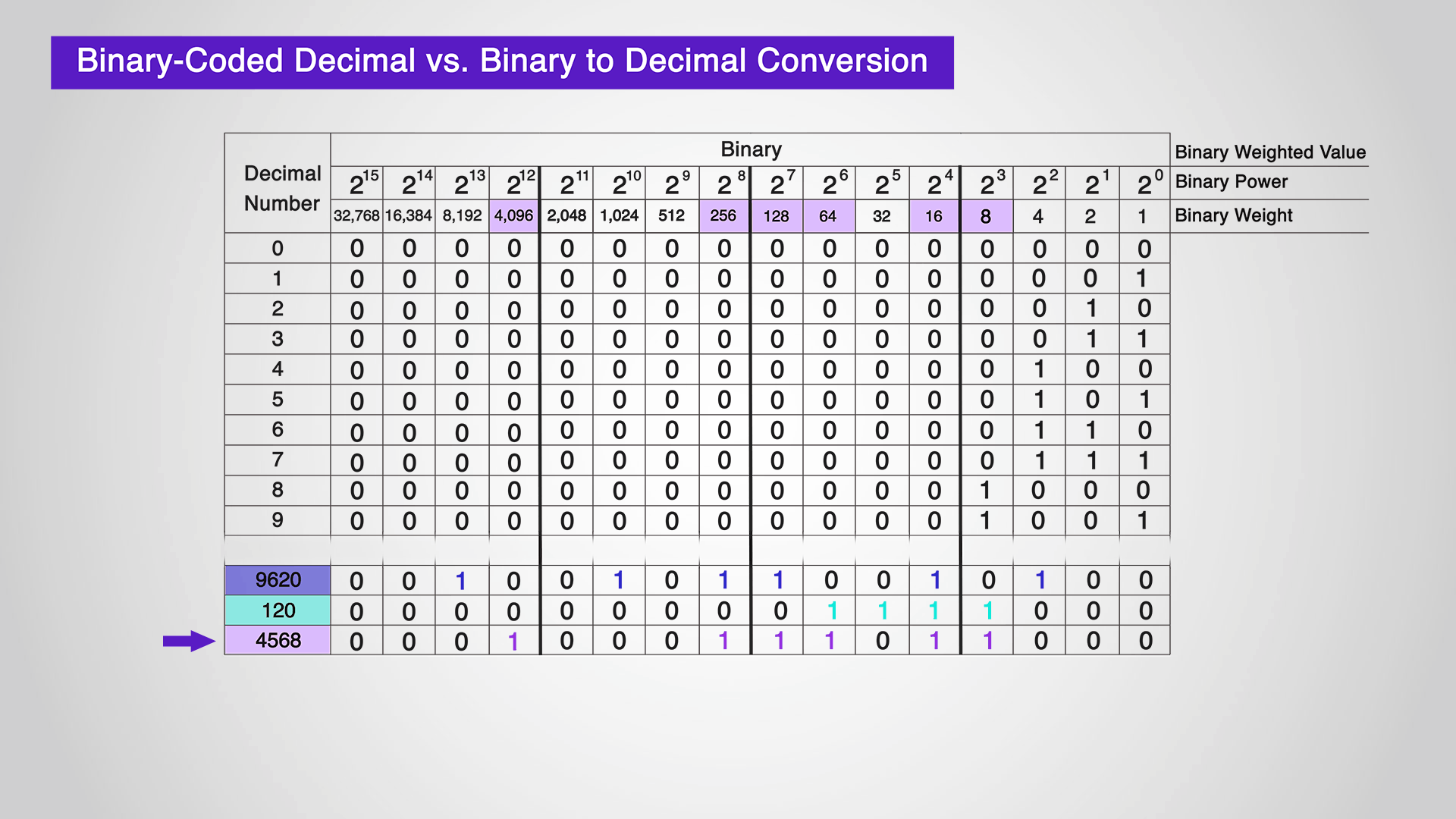 However, for the same decimal number, the BCD form representation will be like this:

Electronic circuits and systems can be divided into two types of circuits, analog and digital. 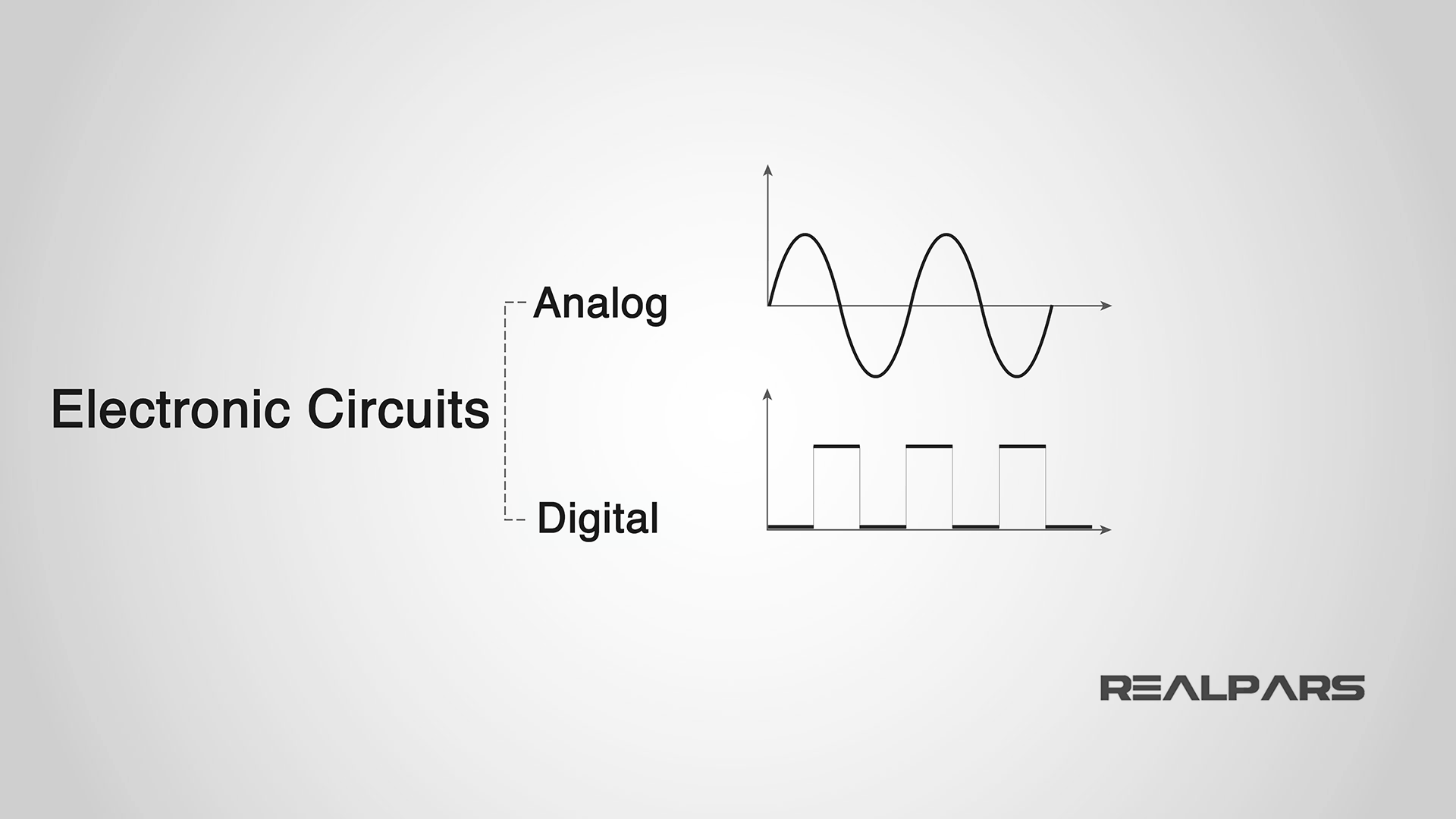 Voltages used in digital circuits could be any value, however in digital and computer systems they are below 10 volts.

A binary number system will use both of these two states.

Digital signals consist of discrete voltage levels that change between these two HIGH and LOW states. 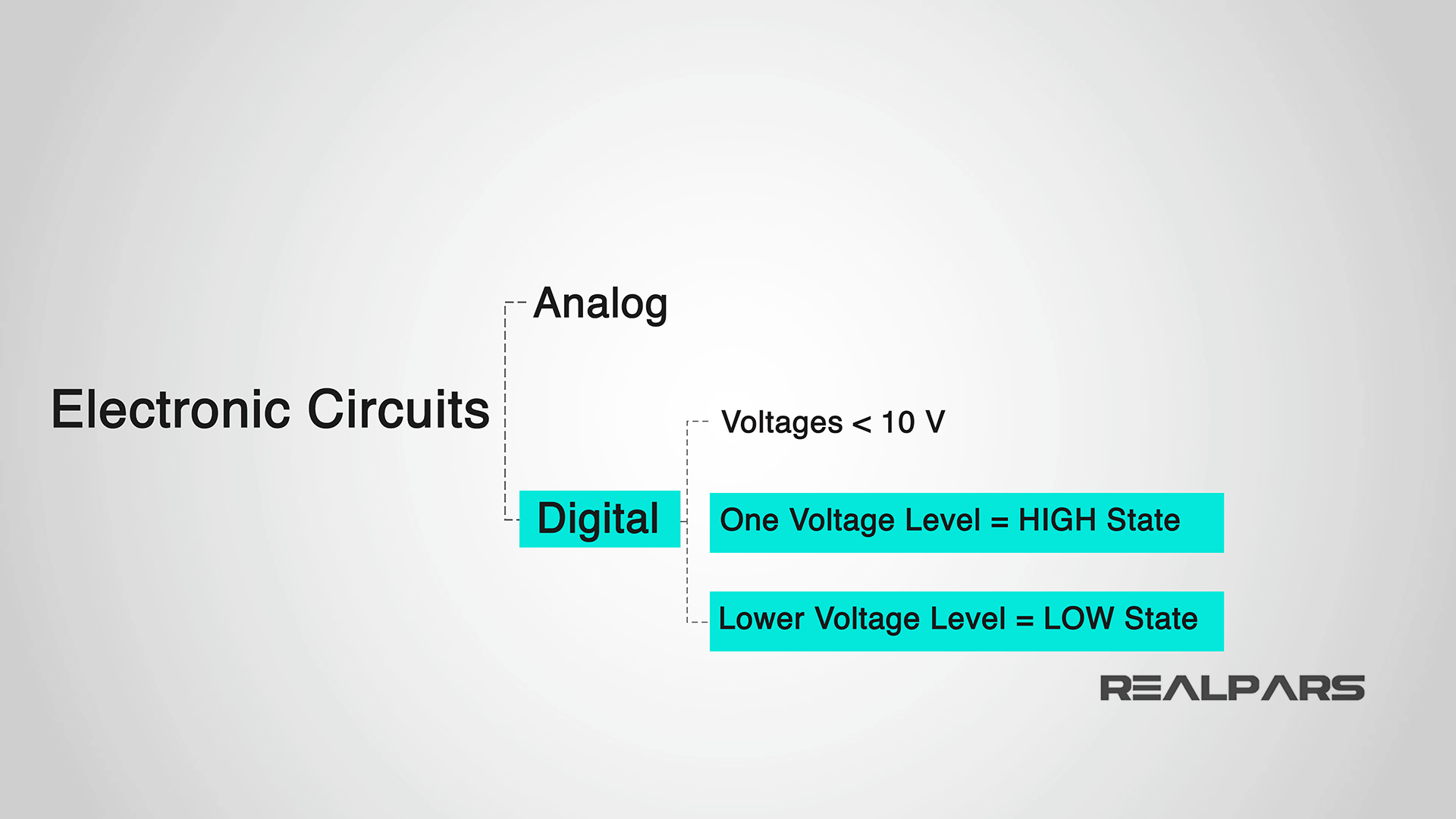 BCD was commonly used for displaying alpha-numeric in the past but in modern-day BCD is still used with real-time clocks or RTC chips to keep track of wall-clock time and it’s becoming more common for embedded microprocessors to include an RTC. 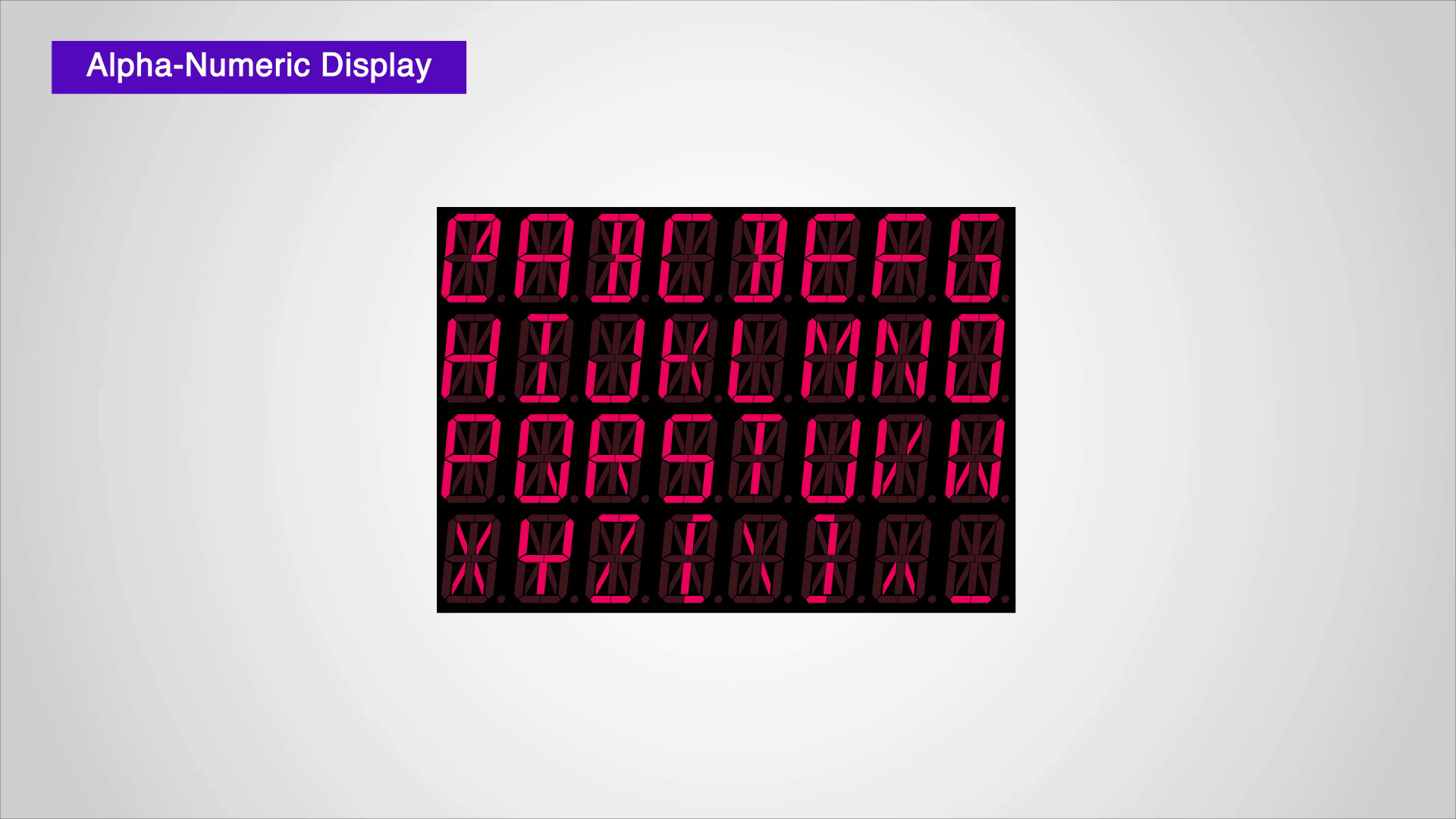 It’s very common for RTCs to store the time in BCD format.

A binary clock might use LEDs to express binary values. With this clock each column of LEDs displays a binary-coded decimal numeral. 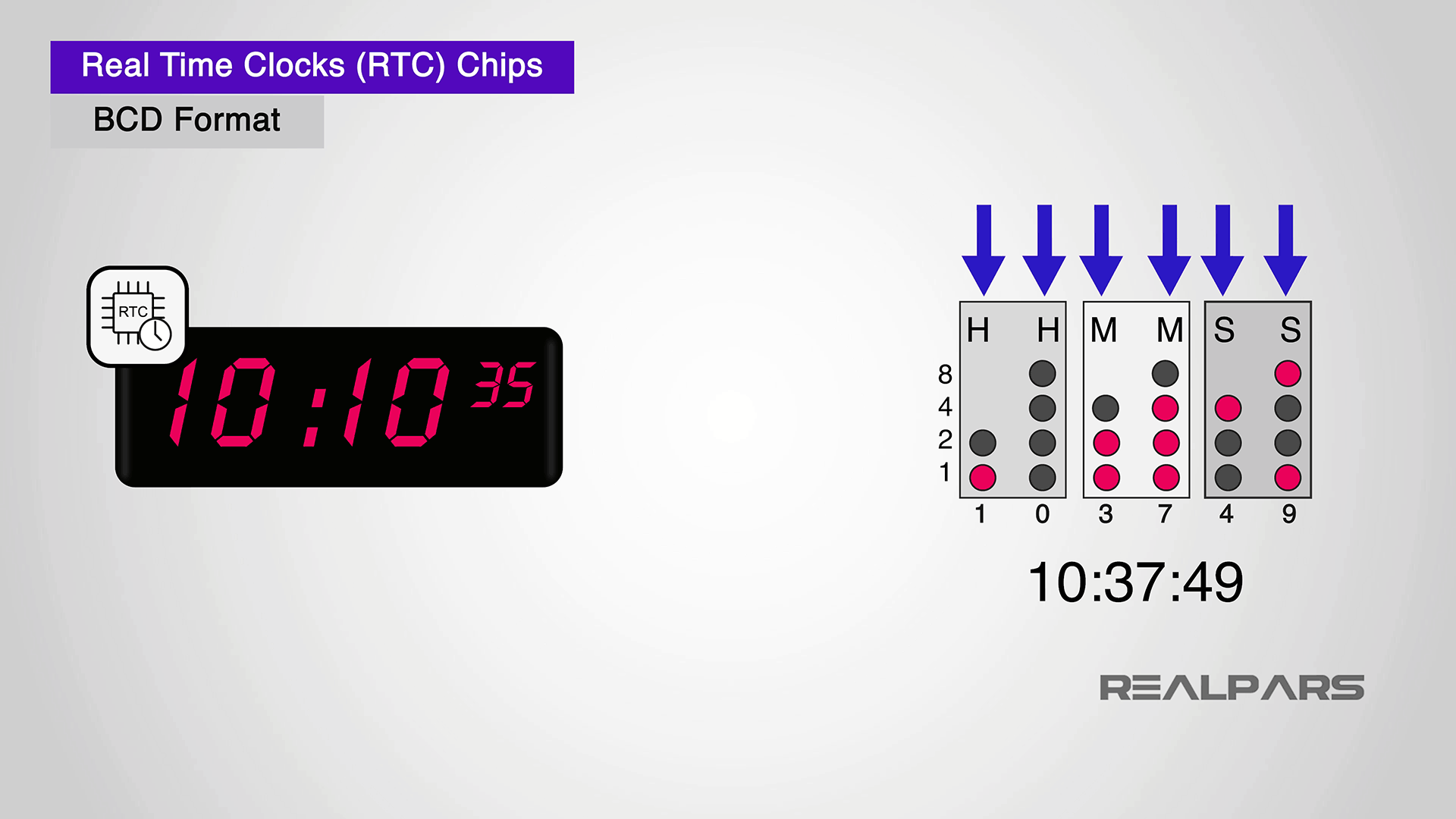 Back in the days, before touchscreens, seven segment displays, and thumbwheel switches were used for a numerical interface between PLCs and humans.

Even before the PLC, these BCD type devices were the only graphical way to interface with system circuits numerically. 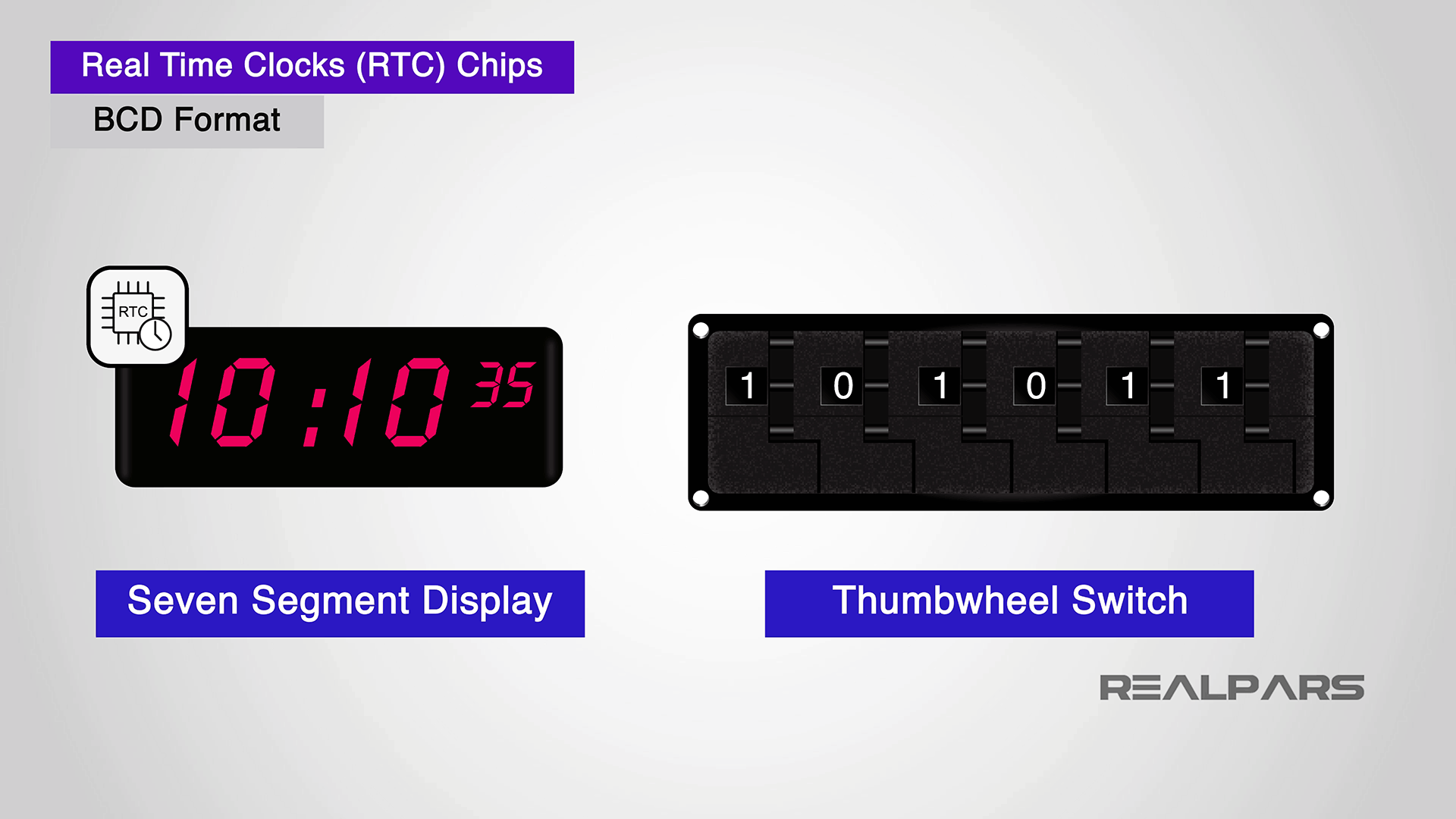 Some PLCs for example, Siemens S7 standard timer and counter data types use Binary Coded Decimal in their data structures because these structures go back to when engineers had to deal with things like these thumbwheels and 7 segment displays.

In fact, the S7 timer setpoints are still entered as S5T#2S for a two-second setpoint because this is inherited from the S5 PLC platform.

These timers use three BCD digits or 12 bits and two extra bits for the time base. This is true for counters in which they only count from 0 to +999. 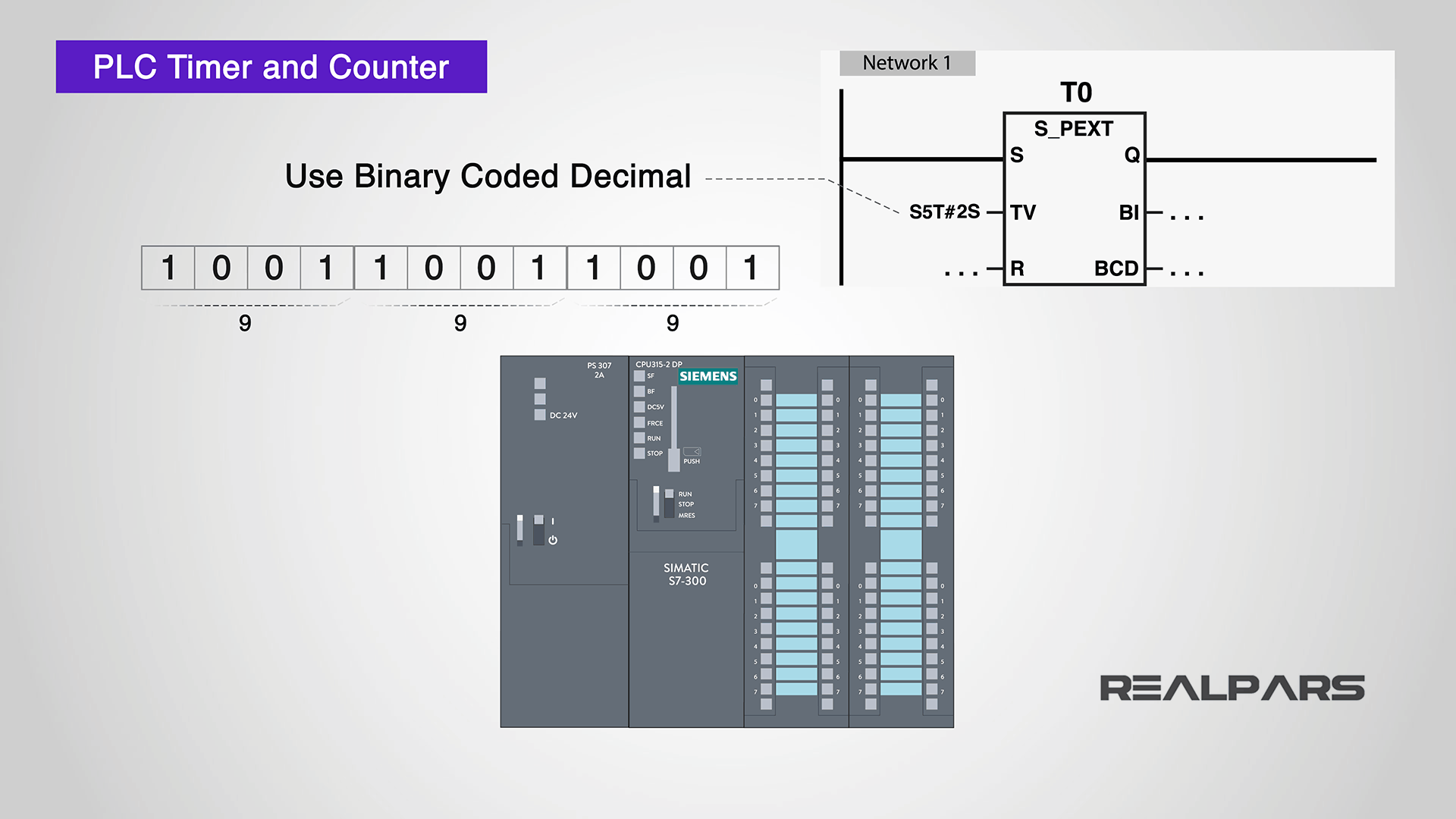 This concludes the article, What is Binary-Coded-Decimal or BCD and how is it used in Automation.

If you would like to get additional training on a similar subject please let us know in the comment section.

Check back with us soon for more automation control topics. 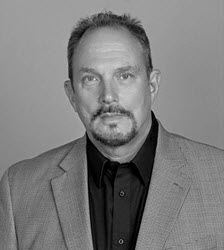 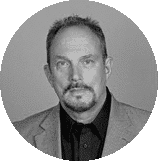